The Search for Brown Bread

Because I discovered what bean pots are and decided I needed to put ours to their intended use and the post that led me to this discovery mentioned baked beans aren’t complete without brown bread, I decided it was time to begin searching for a brown bread recipe. I had no idea there were so many. I also had no idea that I basically make some of them upon occasion when I am simply making bread.

There is something lovely about the terminology associated with baking bread. Well, yeast bread, anyway. “Knead until smooth and elastic.” “Punch down dough.” “Let rise until double,” or “Let rise until double in bulk.” Maybe it’s just me but those all just sound so down to earth and homey.

The search today ended up with a yeast bread recipe that is very similar in many aspects to the recipe I generally use to make yeast bread. This is what it looks like:

Well, you know, that’s what the recipe said. More or less. The way things work around here, however, no recipe ever gets followed exactly so this is what I actually did (well, you know, more or less):

Okay, so for that last one, that’s what I intended to do. Instead, I set the timer and then went on a pattern hunt for Seth and Joseph so they can be Jedi for Halloween (I’m running out of time for goodness sake). The timer went off, I didn’t hear it, Seth turned it off, Seth forgot to tell me. I came back in the kitchen, sat at the table (which is actually in the dining room/area) and started doing stuff on the computer and bugging Joseph to get his school work done. Then it occurred to me to check the oven.

“I turned the timer on,” I said, somewhat perplexed.

So it’s a bit over done but still looks edible.

Actually, now that I’ve cut into it and applied some butter to a slice and have eaten a few bites, it’s quite tasty. 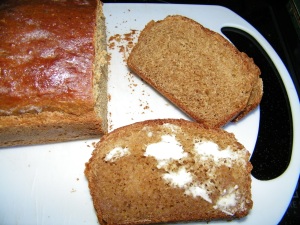 Stay tuned for the baked beans in the bean pot; they won’t be ready until dinner time in a few hours.

2 thoughts on “The Search for Brown Bread”