My Las Vegas cousin’s wife posted this really pretty picture of Thai Chicken Noodle Soup and it looked so good I just had to try it. If you like Thai food, you should like this. If you like chicken soup, you should like this. It’s just good. Maybe even better. PS This recipe is changed from the original and what I have printed out doesn’t say where it came from so I can’t give anyone credit for it, sorry.

We’d been searching for a good recipe for Egg Drop Soup. I believe our search is over now that we’ve come up with our own.

I made some for myself for dinner one evening because I didn’t feel like the leftovers that were available. Joseph tried some and learned how to make it the following morning for breakfast. Seth didn’t want to be left out and he ended up making some for his breakfast as well. This version is much better than the first we tried but you really do need to be careful about the salt.

It is quite easy to double or triple the recipe which is useful. Do keep in mind that Egg Drop Soup doesn’t warm up well in the microwave. On the stovetop, it’s just fine.

Oh, no! I’m turning into Mike!

The only problem is that I did not want to make a whole recipe so I would only need to use one can. “Oh, well,” I thought, “I’ll just make tomato soup and put the other can of tomatoes through the blender and save them for something.” (Be on the lookout for that something within the next day or two.)

I made the soup and it was sitting happily on the stove in its newly madeness and I think that the only problem now is that we don’t need any tomato soup. What to do?

So I put it into these containers that Paul has brought soup home from the Thai and Chinese restaurants and get it ready to pop in the freezer while I’m thinking about Mike. If you’ve never heard about the $50 and Up Underground House Book, you should check it out here. Mike Oehler wrote the book, and several others, and is a character. And I say that with the deepest respect. I worked for Mike briefly before we left Idaho and working for him was the most enjoyably interesting employment I’ve ever had. He has a great sense of humor, doesn’t often wear shoes, has a January birthday just like I do (and I know how much older than me he is), and has many, many stories to tell.

How will the Best Tomato Soup Ever fare in the freezer? That is unknown but when we find out, we will let you know. In the meantime, enjoy perusing Mike’s website and consider buying one or more of his books just for fun.

Best Tomato Soup Ever does very well after having been frozen. The younger boys wanted tuna sandwiches for lunch and I wasn’t in a tuna kind of mood so I thought I’d take one of the containers of BTSE out and see how it fared. Especially since I had some bread to make grilled cheese sandwiches.

I was a bit concerned because I put the yogurt in the soup before freezing and I wasn’t sure how it would fare. All I did to warm it up was empty the container in a pot over medium-low heat (an anomaly for me–I like to cook everything fast). Once it was thawed enough to put the lid on, I did. It was ready to eat in about 30 minutes and turned out just fine. 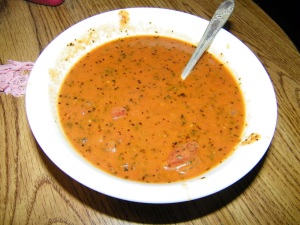 Quite tasty, it was. And you can see the little shavings from carving stamps right by the bowl.

So, if you love tomato soup and want to have a fairly quick and easy bowl on hand, stick it in the freezer!

Okay. I hate tomato soup. I really do. But every now and then I want tomato soup with a grilled cheese sandwich. Until very recently, the only tomato soup I’d ever had was from a can. Yuck! I have an aunt who likes to doctor it up and that does make it slightly better but in general, just yuck. It’s from a can, after all, how good can it be?

1. Dice the onion and melt the butter in a large pot or Dutch oven. Sauté onion until translucent. 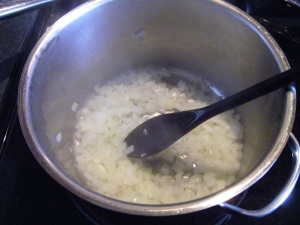 2. Add the diced tomatoes and stir to combine; add the tomato juice.

3. Add the sugar. Some tomatoes are more acidic than others and this amount may need to be altered.

4. Add 1 or 2 tablespoons chicken base to the pot.

5. Add freshly ground black pepper to taste. Stir to combine and heat almost to a boil. Turn off heat. 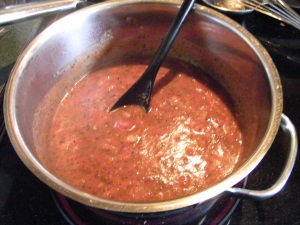 6. Stir in the yogurt. Add the basil and parsley and stir.

I’ll have to get the recipe for the bread I like to use for grilled cheese on here one of these days but in the meantime, just enjoy this stuff with any old bread you like to use. Yum!